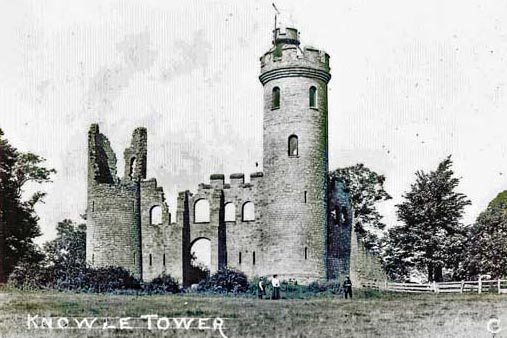 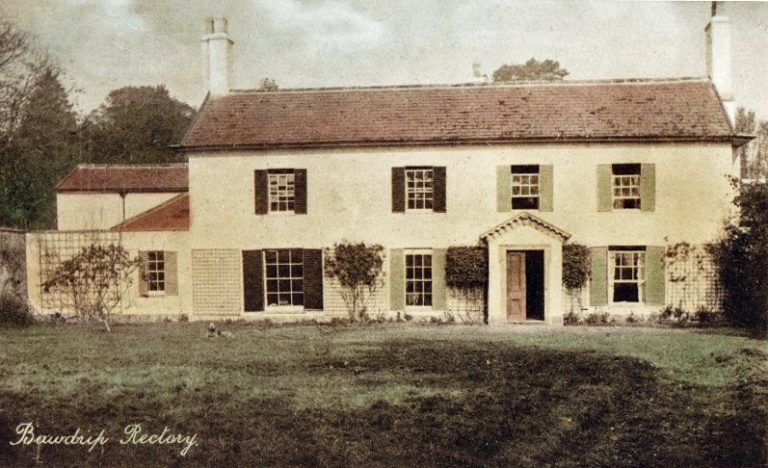 Owned by the Diocese during the latter part of its history and used as a residence by the Rectors.  The property has, understandably, been altered a great deal throughout its long history.  The centre core of the building appears to be the oldest part as the central roof void still has a sample of the original thatched roof.  The house has been remodelled and extended at various stages during its history.  Today it has a principally Georgian facade.

The first reference to a building here is in 1330 when Sir Simon de Bradney “endowed the priest with a house to live in and 18 acres of land in Bawdrip”. In the mid 15th century the Rector was ordered to repair his buildings.

Again, in 1569, the Parsonage was recorded as “being in decay” and there is also mention of the Rectory Farm at this time.

In 1606 the buildings included a bakehouse, barn, stables and cattle stalls.

1792 Revd. John Stradling was the freeholder.

In 1840 the barn and stables were rebuilt.

The 1841 Tithe Award shows that the Revd. Edward Page was in residence as Rector of Bawdrip.  We can only assume the previous occupants were the Rectors as shown in the list below under The Church details.

1881 census shows that the property was vacant.

20th August 1886 permission was granted to demolish the Tithe Barn.  This had been used during the period 1864-1868 to hold services whilst the Church renovations were under way.  The old parish chest was kept here and was at some time removed to Uplands, possibly by the Revd. John Warren, from whence it disappeared.  There is a press cutting which mentions a chest having been sold at Christies in 1934 for 95 guineas, reputedly having been the chest in which the unfortunate Eleanor Lovell of the Mistletoe Bough Legend (see The Church for details) met her untimely end, but it is much more likely to have been the missing parish chest.  Eleanor Lovell was the daughter of Edward Lovell, Rector of the Church 1661-1675.  Behind the altar is a tablet, inscribed in Latin, which is dedicated to the memory of Eleanor, who departed this life on the very day of her marriage.  The translation is as follows:-

“Edward Lovell married Eleanor Bradford, by whom he had two daughters, Eleanor and Mary.  Both parents were sprung from Batcombe, in this county of Somerset, from a noble family and reflected no less honour on their ancestry than they received from it.  Eleanor, a most devoted mother, as well as a most faithful wife, exchanged this life for the heavenly, April 20th 1666.  Mary followed her, a most obedient maiden, and one of notable promise, May 11th 1675.  Edward, the father, M.A. and Fellow of Jesus College, Cambridge, also Rector of this Church for fourteen years, a most praiseworthy man, received the reward of his learning September 1st 1675.  Lastly, Eleanor, the daughter, heiress of the family honour and estates, died June 14th 1681.  Her most sorrowing husband mourned her, taken away by a sudden and untimely fate at the very time of the marriage celebrations, and to the honour and holy memory of her parents, her sister, and his most amiable wife, wished this monument to be put up.”

To give credence to the Eleanor Lovell in the poem being the Bawdrip Eleanor Lovell, she would have had to be married to someone with the same surname, Lord Lovell in the poem.  If she had married her cousin, one of the Lovells of Castle Carey this could be so.  There could be another connection which could link the poem to Bawdrip.  One of the bells housed in the bell tower was made by a Thomas Bayley in 1745 and he may have been a relative of the Thomas Haynes Bayley who wrote the poem.  It could have been that the bell marker saw the Lovell monument in the Church and told his family member, who then wrote the poem.  However, this is pure supposition.  What do you think?

The mistletoe hung in the castle hall;

The holly branch shone on the old oak wall.

The Baron’s retainers were blithe and gay,

The Baron beheld with a father’s pride

And she, with her bright eyes seemed to be

The star of that goodly company.

And, Lovell, be sure you’re the first to trace

The clue to my secret hiding place.”

Away she ran, and her friends began

Each tower to search and each nook to scan.

And young Lovell cried, “Oh, where do you hide?

I’m lonesome without you, my own fair bride.”

The sought her in vain when a week passed away.

Young Lovell sought wildly, but found her not.

The years passed by and their grief at last

Was told as a sorrowful tale long past.

When Lovell appeared, all the children cried

“See the old man weeps for his fairy bride.”

At length an old chest that had long laid hid

Was found in the castle; they raised the lid

A skeleton form lay mouldering there

In the bridal wreath of that lady fair

How sad the day when in sportive jest

She hid from her Lord in the old oak chest.

It closed with a spring and a dreadful doom

And the bride lay clasped in a living tomb.

In 1949 part of the Rectory building, nearrest the Road, was coverted into a flat, which was occupied until 1972 by Robert Darcey Harris.

The premises were auctioned at the Village Hall in October 1987 and were purchased by a developer.  The premises deteriorated until, in 1995, it was purchased by Martin and Jillian Stone.  They saved the property and carried out extensive restoration works.   They revealed some wonderful old fireplaces and the roof void still has a sample of the original thatched roof, pointing to its much early origins.

The History Articles reproduced are owned and were researched and produced by Suzie Lewis and her father (now deceased), John Jenkins.